The PKC history curriculum has been designed to be both knowledge-rich and coherently sequenced. Knowledge, in the realm of history, means not only substantive knowledge of historical events, dates and people in the past, but also knowledge of substantive concepts in history (such as ‘empire’, ‘monarchy’ and ‘civil war’), and disciplinary historical concepts (such as evidence, causation, significance and interpretation).

The PKC history curriculum allows children to develop a chronologically secure knowledge and understanding of local, British and world history. The substantive knowledge taught in the curriculum has been carefully chosen and sequenced using a largely chronological approach. Each unit of work should not be viewed as a stand-alone topic, but as a chapter in the story of the history of Britain and the wider world. In this sense, the chronological approach provides a solid framework, anchoring each unit within a wider narrative. Understanding in history requires an understanding of causation. Children will be able to understand the causes of significant national and global events, (such as World War I), when they have some background knowledge of what happened before (such as the origins and growth of European empires, including the British Empire).

Knowledge of substantive concepts and disciplinary concepts have been interleaved across the curriculum, allowing children to encounter and apply these in different contexts. From year to year, unit to unit, lesson to lesson, the curriculum supports children in making connections and building upon prior substantive and disciplinary knowledge. For example, the children develop a secure understanding of ‘monarchy’ in Britain. They begin to learn about British monarchs in Year 1, and build upon their knowledge of monarchy in British society throughout the curriculum, looking at the reigns of significant monarchs such as Henry II, Henry VIII and Queen Elizabeth I, with a focus on understanding the transition from the autocratic and unlimited power of early monarchs to the limited constitutional role of contemporary British monarchs. Each British history unit allows children to add to their understanding of ‘monarchy’ in Britain, the impact it had on the lives of the British people, and analyse the significance and legacy of each monarch.

The PKC history curriculum is balanced to enable children to look in some depth at local, national and world history, encouraging children to explore the connection between significant events and people and how they have influenced the modern world. The content in the curriculum ensures children have a secure overview of a period, before studying aspects in more depth. While many of the units are 6 weeks long, some units are longer, ensuring children secure the complexities of the content and have more time to study the period in more detail.

Each year, the children will study at least one unit of British history, looking at significant ‘turning points’ that help children understand modern Britain (for example, the sealing of the Magna Carta in 1215, the ‘break with Rome’ during the reign of Henry VIII, the ‘Glorious Revolution’ of 1688 and the building of the British Empire). While time is spent developing a solid understanding of the political context of each period (usually first), children will then embark on studying a wide range of contexts in more depth, including the cultural, social and religious context of the time.

For example, when the children learn about the Victorians in Year 5, they look at Queen Victoria as a monarch, the British Empire during her reign and legal reforms, before using sources to understand how the political context affected the lives of ordinary Victorian people in Britain. During this unit, as with many of the British history units, teachers are encouraged to apply the local context, making each unit unique and allowing children to place local stories within the grand narrative of British history.

The curriculum aims to help children understand how the past is constructed and contested. Children begin by learning about what a historian does, looking at basic sources and simplified perspectives to develop an appreciation and understanding of what it means to be a historian. As their substantive knowledge grows, children will be able to ask perceptive questions, analyse more complex sources and begin to use their knowledge to develop perspective. Disciplinary concepts, such as continuity and change, cause and consequence and similarity, difference and significance, are explored in every unit, and children are supported to think outside of their current unit of work and apply these concepts across the curriculum.

In addition to learning about British and local history, the children will also learn about the history of the wider world. Some of these units, such as the units on The Early British Empire and the Transatlantic Slave Trade, will look at the influence that Britain had on the wider world, and how the wider world has influenced Britain. All of these units are studied to provide an understanding of the history of the wider world and our place within it. They cover fascinating ancient civilisations, the expansion and dissolutions of empires, and the achievements and atrocities committed by humankind across the ages.

The curriculum aims to ignite children’s love for history, preparing them with essential knowledge for Key Stage 3 and beyond. All history is worth studying, but as we do not have the time to cover everything, the units have been carefully chosen to cover as wide ranging content as possible without compromising depth. From ancient civilisations and prehistoric Britain to the Cold War and the Civil Rights Movement; looking at law and power across the ages to the impacts of industrialisation and technological advances; understanding invasion and migration, exploitation and political movements for freedom and equality. The curriculum aims to introduce the children to a wide variety of men, women and children from the past; from the widely venerated, to the lives of the less well-known who offer us a rich insight into life at the time- from Aristotle to Martin Luther King, from Emmeline Pankhurst to Alan Turning.

The Primary Knowledge Curriculum aspires to create curious and knowledgeable young people, who hold a deep understanding and appreciation of the discipline of history, and are able to sift and weigh evidence to begin to formulate their own viewpoints and perspectives of the world. 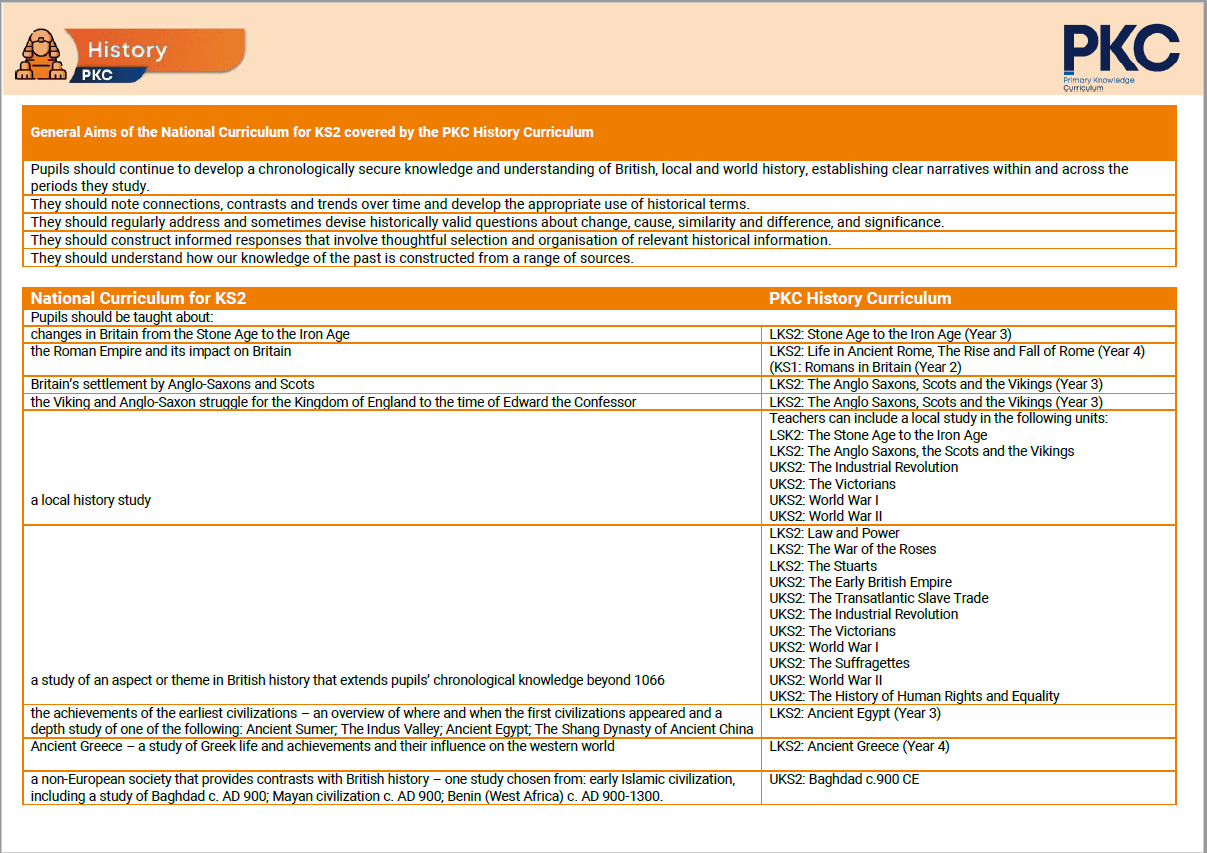